Hello all, I hope everyone had a wonderful holiday. Over the break the members of the LifeSmarts team were hard at work making sure that the 2015 Nationals will be the best one yet! In addition to our usual preparation we have put together the top 7 tips to creating a winning LifeSmarts team. Below, I have included a few highlights from our list.

The first tip for a winning team is of course…PRACTICE, PRACTICE, PRACTICE. Work with your teammates daily using our quizzes and vocab calendars. When practicing, make sure to use buzzers if at all possible. Buzzers help to simulate live matches and make sure you are following all of the rules correctly.

Lastly, USE IT ALL. LifeSmarts.org has tons of resources to help students prepare for competition. For example, be sure to check out our monthly TeamSmarts quizzes, they are a wonderful way to stay ahead of the game.

If you follow these tips, have a positive attitude, and remember to have fun, I guarantee you will be prepared for anything in LifeSmarts!

Check out our LifeSmarts infographic.

One of the reasons I love LifeSmarts is that we teach teens life lessons the easy way (rather than the hard way). We take that seriously, that’s why our motto is “Learn it. Live it.”

This time, I don’t have a “life lesson” per se, but rather an imposition:

Go vote. And if you’re not yet 18, make sure your friends who can vote do so.

A recent Harvard poll shows that only 26% of voters under 30 plan to cast a ballot on Election Day, a noted drop from two years ago. And while it’s true we’re not voting for a President this time, this year’s elections will be just as important (if not more important).

On the ballot this year are 36 U.S. Senators and all 435 Representatives, who will have the chance to make great changes to government policy. Some of these issues are especially important for teens and millennials:

Not to mention there are elections for countless state and local offices that will have a greater impact on your life than Congress: state legislators who decide how much money goes to education and health care, county officials who set road budgets and noise ordinances, school board members that could start your school day later or fund your team’s travel to the National LifeSmarts Championship.

Smart consumers are also smart citizens, and it is your obligation to vote. Take this opportunity to speak up and be an active part of your community.

And if you’re not yet 18, make sure your friends who can vote do so. 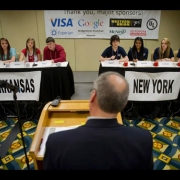 Students across the country will travel to Orlando, Florida this weekend for the National LifeSmarts Championship. This tournament marks the 20th anniversary for the program, which arms high school students around the country with the knowledge needed to be savvy consumers and responsible adults. The tournament begins on Saturday and will culminate on Tuesday (4/29) with a live broadcast at LifeSmarts.org of the semi-finals and finals.

Teams representing states around the country, the District of Columbia, and student organizations FCCLA and FBLA will compete for LifeSmarts glory.

These teams began competition online with the top scoring teams participating in live state competitions. Those winners punched their tickets to Orlando and earned an opportunity to be crowned the 2014 National LifeSmarts Champions. Follow the action on our Nationals Scoreboard housed on LifeSmarts’ Facebook page. We will be updating the scoreboard in live time. Follow your state’s team to track their success. You can also follow the action on Twitter using #LifeSmarts. This year marks the second-annual LifeSmarts Twitter contest. Top tweeters throughout the national championship tournament will win prizes.

For its 20th anniversary year, NCL has launched an all-new, improved, and rebranded LifeSmarts.org, providing new opportunities for participants and cultivating new partnerships. LifeSmarts has a new Web site with better navigation, usability, and social media integration, and a variety of new coaching and study resources, such as ConsumerMan Herb Weisbaum podcasts for LifeSmarts, are available on the site, too.

NCL rolled out a major expansion to LifeSmarts in partnership with the global safety science company Underwriters Laboratories, UL, to provide participants with a community service learning opportunity in their communities. LifeSmarts students are becoming Safety Ambassador, sharing environment and safety lessons with elementary school children in classrooms across the nation. More than 1,000 children have participated in presentations made by LifeSmarts students so far, with many more presentations scheduled before nationals.

LifeSmarts has become an official competitive event open to the 250,000 students involved in Future Business Leaders of America (FBLA) chapters. FBLA participants have the opportunity to compete through FBLA or LifeSmarts – and this year hundreds of teams have taken advantage of the two ways to win. One FBLA team will represent FBLA at nationals in an at-large berth, and as many as 10 other state champions teams are comprised of FBLA members.  In addition, the 24 top FBLA teams will advance to compete live at the FBLA National Leadership Conference in June.

The 2014 season is in the home stretch. The majority of state competitions are taking place in February and March, with 20 state champion teams already determined. The 2013 national champion team from Paxon School for Advanced Studies, in Jacksonville, Florida, will return to defend its title.  At last year’s national competition held in Atlanta, the Florida team took home top honors after competing for four days against 38 state champion teams from across the country.

LifeSmarts is an educational competition run by the National Consumers League to test middle school and high school students nationwide on real-life consumer issues through online quizzes and live competition LifeSmarts provides participants with practical advice and information on consumer issues ranging from personal finance and health and safety to the environment, technology, and consumer rights and responsibilities. Starting online each fall, the competition progresses to live state play-offs, and then builds to a high-spirited National Championship.

Over the years, LifeSmarts has steadily grown in numbers of student and adult participants, state partnerships, and corporate sponsorships. In the most recent season, an estimated 125,000 students and teachers across the country formed nearly 2,000 LifeSmarts teams and answered more than 3.5 million LifeSmarts questions.

This year, LifeSmarts state champion teams from across the country will be treated to the Disney experience, staying at a resort in Orlando on the Disney campus, visiting DisneyWorld, and meeting Timon, a beloved character from Disney’s The Lion King, who also stars in the UL Safety Smart videos.

“The National Consumers League’s mission is to inspire confidence and safety in the marketplace. The LifeSmarts program fosters students’ understanding of consumer issues and provides them with real-world knowledge they will need to take charge of their lives,” said Lisa Hertzberg. “We are looking forward to our best national event ever!”

After four exciting days of individual assessments, group activities, and team buzzer matches, the Paxon School for Advanced Studies from Jacksonville, Florida outlasted 38 other teams from around the country to claim the title of LifeSmarts champion in the annual national competition. This year’s championship in Atlanta was the biggest competition ever, featuring teams from 35 states, the District of Columbia, and two student organizations, FCCLA and FBLA.

LifeSmarts is a national competition that tests teens around the country on their consumer knowledge. There are five areas of focus including: personal finance, health and safety, consumer rights and responsibilities, the environment, and technology.  LifeSmarts not only gives high school students a chance to demonstrate their consumer acumen, but also provides an opportunity to learn about issues that will prove useful in the real-world. As LifeSmarts participants progress through high school, they will be armed with the practical knowledge needed later in life to protect themselves and their finances.

This year’s competition featured a new collaboration with Underwriter’s Laboratories (UL) called the Safety Smart! Ambassador Program. The Safety Smart! program gives LifeSmarts students the opportunity to reach out to younger students in the community and teach them lessons about health and safety.  These lessons feature a curriculum that teaches young children the benefits of going green and being healthy and fit. Older students have an opportunity to reach out to the elementary school students and gain important life skills such as leadership, public speaking, and the importance of advocacy in the community.

This year also marked our first ever Twitter contest. The Twitter competition served as a tool to increase buzz around the national competition and many students, coaches, parents, coordinators, and spectators participated. Three winners were selected for demonstrating both quality and quantity in what was tweeted during competition. The winners were: Alicia Heis (IN), Kennnedy Langton (FBLA), and Tshala Pajibo (DC).

NCL is very excited to announce that next year’s 20th annual national competition will be held in Orlando, Florida. Teams representing every corner of the country from Hawaii to Washington to Maine participated in this year’s event and we believe our ultimate goal of inviting a team to our national competition from all 50 states is within reach.  Educators, financial institutions, attorneys general, governmental organizations, and others see the benefits of the LifeSmarts program and continue to invest in educating the next wave of consumers. Knowledge is power, and consumer knowledge gives students the power to avoid financial pain and make healthy, intelligent life decisions. To find out more about the LifeSmarts competition please see our Web site. To see the LifeSmarts students in action, check out our photo album from this year’s competition.